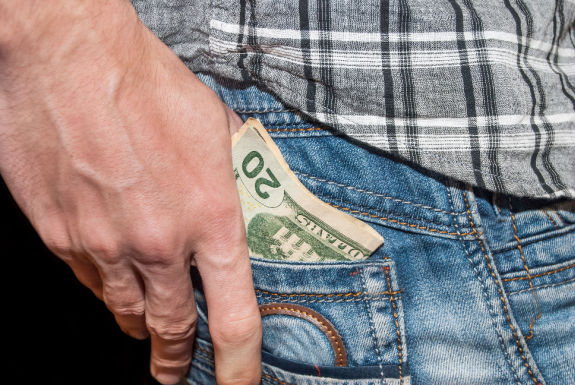 We came across an article in Craft Brewing Business on prevention tips for employees pocketing cash sales and how it could continue to impact your business and wanted to share:

A Craft Beer Professionals group member recently discovered, across two taprooms, that three employees were pocketing cash sales and asked for “any secrets on how to prevent such theft that doesn’t require much time watching surveillance footage.” Going cashless quickly emerged as a common, modern prevention tip.

Sterling Steffen, Trademark Brewing: I wish I had a better solution: But how much cash are you seeing? Our total cash sales are about 4-6% of the taproom gross… so we’ve discussed eliminating it all together. Sure, CC costs money – but so does cash handling.

Jennifer Thompson: I think you may lose a few good Beertenders if cash was eliminated. It’s something to be considered.

Sterling Steffen: What? Why?

Jennifer Thompson: A lot of bartenders rely on cash tips as immediate income. Also, while they are responsible for reporting 100% of their cash tips, I doubt they do. Thus, pulling cash off the table may be an issue for a lot of them.

Suzanne Kandler: We do take cash and report cash tips but all our tips go into a tip pool daily and we do not payout cash at shift close. We have had zero issues with money getting taken. The reported tips get deposited into brewery account and then put on each paycheck. We are very transparent with tips so employees have something to verify this is being done correctly.

Tamara Sturdavant: Are they on a shared drawer? You’ve let go of the thieves already? We have a camera pointed right at the drawer- mainly for when someone says they got the wrong change or gave a 20 and said it was a 50.

Jillian Veronica: People are not asking for receipts, mostly. So if it’s a cash sale and they’re trying to steal they can just not ring it in or pretend to ring it in. If it’s really busy this is easier to get away with.

Matthew Fuerst: For those using Arryved, what I did learn is that it seems to be all or nothing as far as letting ordinary bartenders see reports on the tablet. I have no problem with them seeing the amount of total sales that day. However, the “cash handling” report makes it very easy for them to see how much cash should be in the drawer and take anything above that. I’ve put in a request with Arryved to have more granular control over what reports employees can and cannot see.

Casey LeFever, Odd13 Brewing: There are many ways a bartender could steal, both from the business and their coworkers. For this, they’re probably hitting “no sale” and either reconciling the drawer back to even, or maybe even using a certain spot in the drawer to place the money. One, you could hide the report all together, but like I said, they could just set the extra money somewhere (for example, under the 20s).

Two: you could regularly reconcile the drawer mid shift. Randomly. Just walk down, run the report, and count the till.

Three: make sure you have managers/supervisors behind the bar that you trust. Interestingly, I’ve found the more people you have behind the bar, the less likely something happens, because it’s harder to hide from coworkers. You could get really intense about inventory, but that’s tough with beer (easier with liquor). Cash makes up for 2% of our sales. You could assume not every cash transaction is stolen, so I don’t know how you’d track down <1% loss and link it to an individual. Like others have said, make sure that you have a good culture, that they’re making decent money the right way, and that you’re strict about any kind of theft.

Brian Flach, 7th Wave Brewing: This used to happen at a brew pub chain that I worked at. where cash sales would not be rung in and they were even making change out of the tip jars. Generally it was draft pours and would happen during large rushes (sporting events/concerts/etc.) It was discovered when the weekly inventory reports of beer on hand did not reflect the sales numbers. This should also work for beer to go sales if the inventory numbers don’t line up with the sales numbers then you will see a problem right away.

Bill Coffey: Sadly, if they want to steal, they will. You need to have a strict policy about nothing being poured or served without a tag. That’s how a lot of it happens. They will pour it, and wait to see if it’s cash or a credit card. I could probably write a book about all the sneaky tricks that I’ve seen.

Matthew Fuerst: I appreciate all of the helpful feedback. I can’t say I was completely surprised by some of the comments correlating theft with poor leadership, company culture, or compensation. Those factors certainly can have an effect, but I wish that wasn’t the automatic assumption from many people reading and commenting on this post, and to say that theft doesn’t occur when those factors are absent is somewhat naïve, imo. I’m fully aware that this industry needs to do better for its employees, and I’ve made enormous financial sacrifices to ensure that my employees earn a living wage.