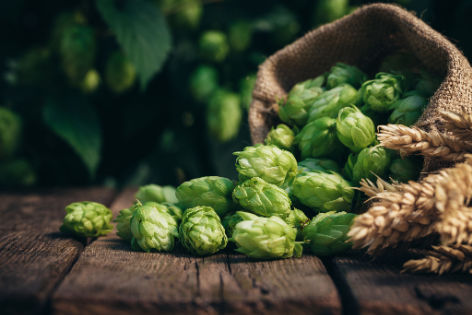 “The Brewers Association (BA) Supply Chain Subcommittee, part of the BA’s Technical Committee, is comprised of volunteer members who meet monthly to review the status of the brewing industry supply chain and to develop resources for brewers. These posts from the Brewers Association are intended to inform BA membership of the latest developments in the brewing supply chain.”

“As 2022 draws to a close, this year-end update [from the Brewers Association] will provide a brief summary of hop and barley harvests, as well as a look into the future supply of these two key ingredients. This will be followed by a brief update on the current supply situation for CO2 and ideas for risk mitigation.”

For a detailed summary and review of the world harvests for barley and hops in 2022, check out the Brewers Association November/December 2022 Raw Materials issue of The New Brewer.

“The most significant news on the 2022 hop harvest is coming out of Europe. Continued hot weather and low rainfall affected hops throughout western Europe. Particularly affected were the traditional German landrace varieties with reported yields down as much as 40% for certain varieties. Newer varieties with improved agronomic characteristics fared slightly better, but with most varieties showing decreases in yield. Other growing areas, such as the Czech Republic and Great Britain, report similar decreases in harvested volumes. With the growing trend towards lager beer in American craft brewing, securing supply of European hops should be a priority for lager brewers.”

“For the first time in several years, the number of acres strung with hops in the U.S. declined slightly in 2022.”

“The 2022 barley harvest in North America improved over the disastrous harvest of 2021. Both quality and quantity were near long term averages. The European harvest was also near average despite the hot weather with poorer yields in the southern growing regions. That said, global supply remains tight due to the depletion of stocks from the poor harvest in 2021. It is anticipated that brewers without contracts who are purchasing on the spot market may still encounter limited supply.”

“The current energy crisis in Europe is beginning to look like a confounding factor. Both availability and the high cost of natural gas has reportedly caused some malting facilities to curtail operations with some reports of temporary closures. BA staff will continue to monitor this situation.”

“The extreme shortages of CO2 experienced during the late summer and early fall seem to be abating with some local and regional shortages still being reported. Supply remains tight and future shortages would not be surprising. Due to decreased consumer spending, the extreme demand for aluminum cans has lessened, creating better availability. Finally, slowdowns in the global economy have allowed the price of overseas shipping to begin dropping from record highs.”

As reported by the Brewers Association; “Continued volatility in the barley and hop industries created by both climate change and unstable global markets illustrate the need to find ways to mitigate these supply chain risks. Other factors can also come into play, such as increased shipping costs, changing plant protection rules, and continued inflation. Breweries can protect themselves from this volatility in several ways. Contracting for future needs has its own set of challenges but well-executed contracts can provide benefits. Brewers also need to be prepared to evaluate and potentially switch to newer barley and hop varieties with stronger, more resilient agronomic characteristics, such as increased ability to withstand abiotic stress and higher yields per acre.”