Keeping Up with the New Hop Products 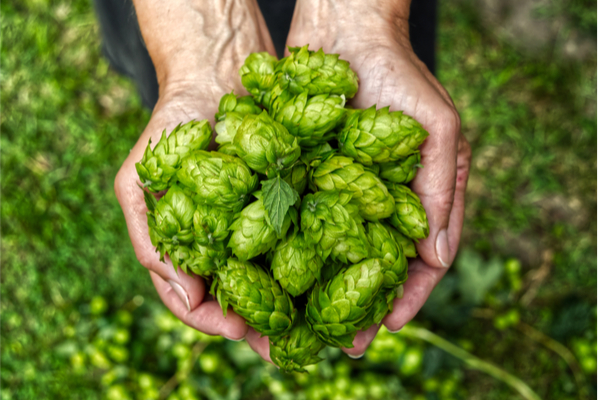 New hop-derived products for aroma and flavor are appearing faster than brewers can learn how best to use them.

How do you brew a thoroughly modern IPA using Mosaic, Ekuanot, Amarillo, and Centennial hops—but without adding whole cones or pellets?

Here’s how Colorado breweries New Terrain and Odd13 did it recently, for a collaboration beer they called Kame Majik: They chose CO2 extract and steam-distilled hop oils from Hopsteiner, a flowable hop-based product called Incognito from John I. Haas, and additional oils distilled from freshly picked, unkilned hops by Montana-based Glacier Hops Ranch.

Untappd members liked the IPA well enough to give it a cumulative score of 3.83—not as high a rating as either brewery’s most popular beers, but certainly not a flop. Nonetheless, New Terrain co-founder Josh Robbins does not consider it a success.

“The combination of oils doesn’t [measure] up to the whole hop,” he says. “They are good, but they don’t replace hops.”

But New Terrain isn’t about to quit using advanced hop products. They are valuable tools—among other things, they add intense and unique flavors, increase beer yield, and help to mitigate hop creep—that become more powerful when brewers understand how to best use them. New Terrain’s brewers keep a spreadsheet to track new hops and hop products that interest them. Neither list is getting any shorter.

Each of these products, obviously, comes with a different set of instructions.

Colin Wilson, managing director at TNS, recommends that brewers get to know these products just as they get to know new hop varieties. “A lot of them expect it to be a magic bullet,” he says. “Good beer, the defining character is a balance. That’s difficult to accomplish with a hop oil on the first try. It takes two or three iterations.”

Scott Janish, author of The New IPA: A Scientific Guide to Hop Aroma and Flavor, agrees. He and Sapwood Cellars partner Michael Tonsmeire have done multiple benchtop batches with various hop-oil products. “Based on our experience, [that] is so helpful,” he says. They’ve found that dosing at a rate of 100 ml (3.4 oz) for 10 barrels is a good starting point.

“The products are different,” he says, rattling off the different ways each producer makes them. “What’s the difference, and how do I use them?”

TNS itself offers multiple options, whether for hops from New Zealand or elsewhere. Brewers will be most interested in HopShot, designed for the whirlpool and flavor, and HopBurst, meant to be used as a dry hop. They are variety-specific. “There are some really interesting citrus notes in [some], such as Wai-iti and Motueka,” Wilson says.

Janish suggests caution when using HopBurst because it may increase perceived bitterness. HopShot is a little softer. They are at their best when blended with pellets, adding a brighter “pop”—thus the focus on dosing rates. “You don’t want to get into that green territory,” he says.

“We have the ability to peel out specific terpenes,” says Wilson. “We take our fractions and smash them up.”

That intrigues Janish. Extracted oil contains compounds that are otherwise reduced during the brewing process. Myrcene—which can add a green, artificial flavor to beer while masking underlying flavors—is one of the most prominent. In early August, Sapwood Cellars brewed a collaboration beer with Other Half, with a plan to finish it with Simcoe HopBurst that was fractionalized to reduce myrcene. (The beer is currently in production.)

“We can tune up or down the flavor notes,” Wilson says. “By taking thin salami slices we can remove hydrocarbons selectively, and when we put the other components back, synergistic effects happen. Some components are now above sensory thresholds. With Scott, this was customer-preference feedback. He dictates what is good, bad, and we adjust accordingly. So we end up with a low amount of hydrocarbon and a juicier, fruity blend.”

Janish and Tonsmeire particularly like Nelson Sauvin, the New Zealand hop variety highest in demand and known for its sauvignon blanc–like character. In June, Sapwood released a beer with Nelson Sauvin added in the mash and in the kettle, dry hopped twice with Nelson, then finished with a dose of Nelson oil. They described the beer as an “intense expression of the hop’s range of aromatics: gooseberry, sauvignon blanc, and rhubarb.” (Untappd members have given it a cumulative 4.27 rating.)

That beer blended hops with extracted and fractionated hop products. “To me, TNS makes the most sense,” Janish says, “if you are willing to keep experimenting and work with them. That could be fun.”

At New River Distilling in North Carolina, founder Daniel Meehan reports that they recently finished distilling a large batch of Cascade hops for Connecticut’s Two Roads Brewing. “The aroma that initially hits is light fruit and citrus,” Meehan says. “It is now one of my favorite profiles.” Since 2018, the company has been turning hops that brewers already own into oil, neatly solving a problem for those who contract for more hops than they can use.

Because dry hopping is so inefficient, New River began using the same process to retrieve oil from spent dry hops. Meehan is working with ICONYC Brewing in Long Island City, New York, to pilot an in-house extraction system that will plug into their brewery. “They will be able to process their own T-90 pellets for distillate and process their spent dry-hops to recover lost distillate,” Meehan says. He expects to begin selling the system to other breweries soon.

Salvo, for the Whirlpool

Hopsteiner recommends using Salvo near the end of boil or in the whirpool; brewers can expect the sort of biotranformation of compounds within the hops that produces fruity and related flavors. Alpha acids have been removed, so the extract should add little to no bitterness. It brews true to variety and currently is available for Altus, Apollo, Bravo, Cascade, Centennial, Chinook, Eureka, and Zeus hops. It is soon to be available for Calypso, Lotus, and Sultana as well as Trident (a hop blend).

Spectrum, for the Cold Side

Like Flex (for bitterness) and Incognito (for the whirlpool), Spectrum is flowable at room temperature and easy to add. Referred to as a “liquid dry hop,” it is designed for cold-side additions, and BarthHaas recommends using it during secondary fermentation. The replacement rate for pellets is 1:5 to 1:8. Spectrum is currently available in Citra and Mosaic. “Both are true-to-type, and we’ve standardized the oils, so you get exactly what you expect, batch to batch,” says Jack Teagle at BarthHaas.

“We’ve thoroughly enjoyed brewing with Frozen Fresh Hops,” Steve Luke of Seattle’s Cloudburst Brewing said for a press release. “They bring the ‘harvest buzz’ to our brewery outside of the picking the window. The quality of the hop cones has been exceptional, and we’ve seen zero differences when compared to our traditional fresh-hop beers.”

For 2021, YCH is taking orders for Azacca, Cascade, Citra, Mosaic, and Simcoe.

When Colorado’s New Image wanted to brew with fresh hops flown in from the Northwest, but also dry hop later with cones from the same lot, the solution was to have Oast House Oils extract terpenes from that lot. New Image dry hopped with those terpenes seven days later.

New Image founder Brandon Capps has used hop terpenes in several limited-release IPAs. “I’ve been using this as more of a finishing salt to date,” he told Craft Beer & Brewing Magazine®, using terpenes for up to 20 percent of the hop bill, alongside conventional hops. One problem: the terpene extracts are hydrophobic—they don’t mix with water. Capps first mixes them with a spirit of at least 190 proof before adding.

Oast House uses supercritical carbon dioxide to separate hop plant material from its products, which are collected as a liquid. Fusion is the terpene line, with eight standard varietals, and (currently) seven small-batch varietals.

Telluride Brewing was one of the first breweries to use Oast House terpenes, featuring them in an ongoing series of IPAs called Galloping. They brew each iteration with a different variety. In the first, hopped with Cashmere, cofounder Chris Fish added half the dry hops he would have otherwise. “We started out safe, more of a complement to the dry hop,” he says. For the next batch, with Mosaic, he cut the previous dry-hop amount in half. For the third, with Azacca, he halved it yet again.

“If there is one lesson to be learned, it is about dosing,” says Wilson at TNS. “Brewers don’t like adding just a little. ‘We’ll add a little bit more for luck.’”