How Did Breweries Pivot During the Pandemic and How Have They Recovered? 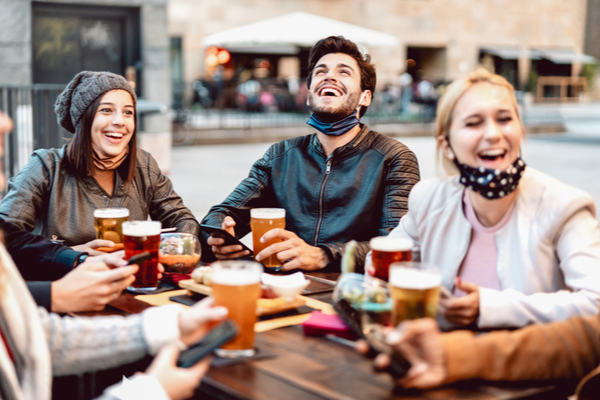 One of the buzzwords of 2020 was “pivot,” as in small brewers survived the worst of the pandemic by “pivoting” to more to-go and packaged sales. Despite the concept of pivoting to to-go being mentioned in countless articles over the past 20+ months, however, I’m not sure I’ve ever seen industry data points on how big those shifts were or how they’ve persisted or receded as the on-premise environment has clawed its way back toward “normal.”

That’s why I’m excited to present some data on draught versus packaged sales at brewpubs, taprooms, and other craft beverage locations using aggregated point-of-sale (POS) data made available to the Brewers Association by ArryvedOpens in new window. If you’re not familiar with Arryved, they are a point-of-sale solution specifically designed for craft producers and now used by more than 1,200 locations across all 50 states and Washington, DC. I’ve used their data in several previous data posts.

Arryved provided anonymized data that included sales levels for various POS codes aggregated by month and location (the only identifying info provided was location state). We then went through and assigned categories to those POS codes that labeled them draught sales, package sales, or indeterminate (example of indeterminate: “1 Can Beer” without a “RETAIL_BEER” or “DRAFT_BEER” tag).

Before digging in, here are a few limitations of the data and my analysis.

The first is that the data set changes over time in terms of brewery composition. By the later months these changes probably don’t matter that much since adding 30 locations to a data set that already comprises 1,200 locations doesn’t shift anything that much, but it’s worth keeping in mind for some of the 2019 data points.

The other big limitation is that we didn’t code everything. With 5,500 beer specific POS codes, many of which have little volume, that didn’t seem like a good use of association time, especially when the top 400 codes are roughly 95% of the total beer transaction volume. So, we coded the top codes and then took a random sample of 250 codes from the rest. This random sample did suggest that the top codes are biased toward draught. It doesn’t shift the overall numbers that much, but I’ll try to note where we’ve adjusted for that and where we haven’t.

Packaged and Draught Sales at Breweries

That work leads to the graph below, showing things we were able to cleanly code as draught beer as a percentage of total volume sales by month, both before and then through the pandemic (these are the adjusted numbers that estimate all of the things we didn’t code based on that random sample). These percentages are done in total ounces, so a four-pack of 16-ounce beer is coded as 64 ounces and a pint as 16 ounces. 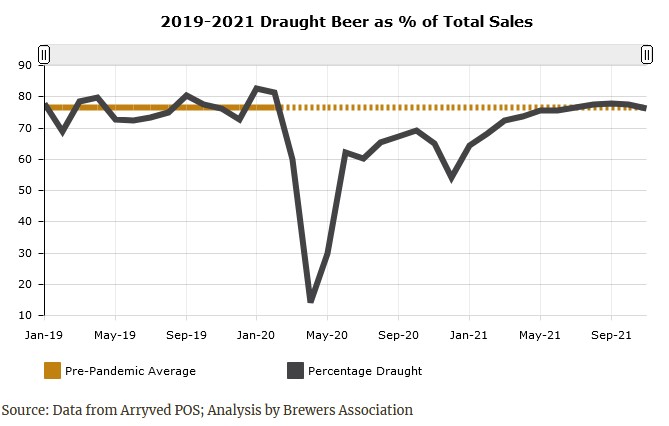 It shows the remarkable shift in sales immediately following the pandemic and then the recovery through the fall of 2021, where draught levels as percentage of total volume sales at taprooms and brewpubs were back to where they had been pre-pandemic. That average line is the average from January 1, 2019 through February 1, 2020, and at about 76% draught (in total ounces) that’s almost exactly where we were in November of 2021.

Percentages don’t show absolute levels, so here is a per location draught sales index (100 = average total sales volume per month from Jan. 1, 2019- Feb. 1, 2020). I’ve lumped things we couldn’t code neatly in with packaged sales, since at an aggregate level, they have a strongly positive correlation with packaged sales and strongly negative with draught. This doesn’t shift the numbers that much, since we weren’t able to neatly categorize only 1-2% of total volume that was coded. 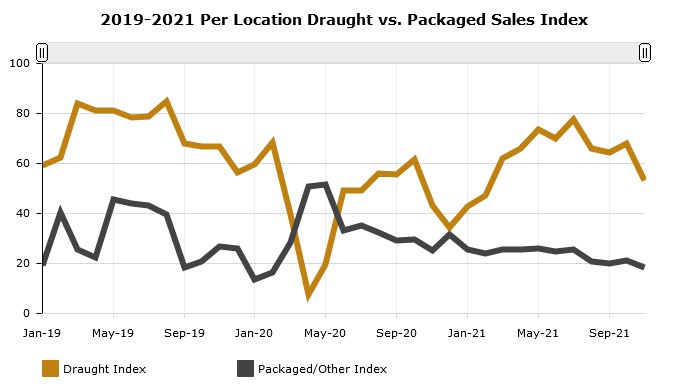 What this view shows us is that draught dropped more than that percentage alone would suggest, so that packaged sales didn’t fully make up the lost beer volume during the hardest hit months (though they did make up a lot of the drop). This view also suggests that per location sales may still be down prior to pre-pandemic levels, but that’s a more complicated analysis once you account for A) seasonality, and B) changes to the data set (the new breweries who have been signing up might have different business models than existing customers). That second point could be a good topic for a future post tracking a same set of breweries over time to look just at their comparable volume.

To drive the point home, both of these views suggest that the boom in to-go sales that breweries saw during the pandemic hasn’t systematically stuck around. Sure, some breweries have leaned into to-go, but on average, draught is back to where it was as a percentage of taproom and brewpub sales, and packaged sales are back at, or even below, where they were pre-pandemic.

This data set also allows us to look at these changes by place. Here are similar views (note: these do not include the same correction for possible bias and so show slightly higher draught percentages and levels than the national numbers shown above) for four of the states with the most locations in the data set—California, Colorado, Florida, and North Carolina.

This draught view shows the effects that changes to state policy, time of year, and case numbers can have on brewery sales. You can see the clear effects of changes in California—and, to a lesser extent, Colorado—in late 2020 and early 2021. This state data also lines up fairly closely with other data sets—again, lightly suggesting that draught at breweries perhaps recovered a bit quicker than other channels, though that gap has largely closed.

Here is the draught data above for California lined up against Open Table reservation data for the state. 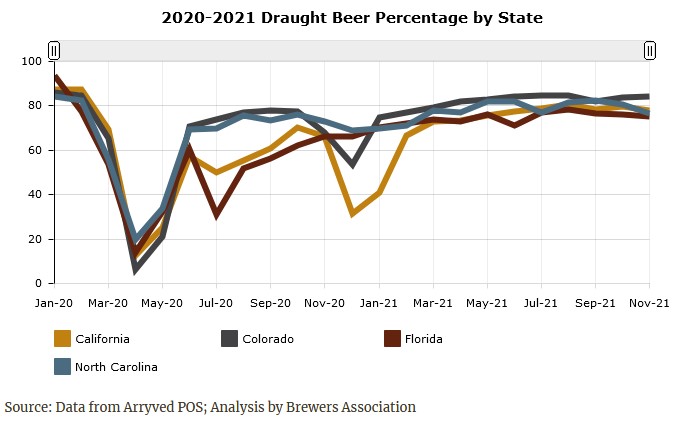 This draught view shows the effects that changes to state policy, time of year, and case numbers can have on brewery sales. You can see the clear effects of changes in California—and, to a lesser extent, Colorado—in late 2020 and early 2021. This state data also lines up fairly closely with other data sets—again, lightly suggesting that draught at breweries perhaps recovered a bit quicker than other channels, though that gap has largely closed.

Here is the draught data above for California lined up against Open Table reservation data for the state. 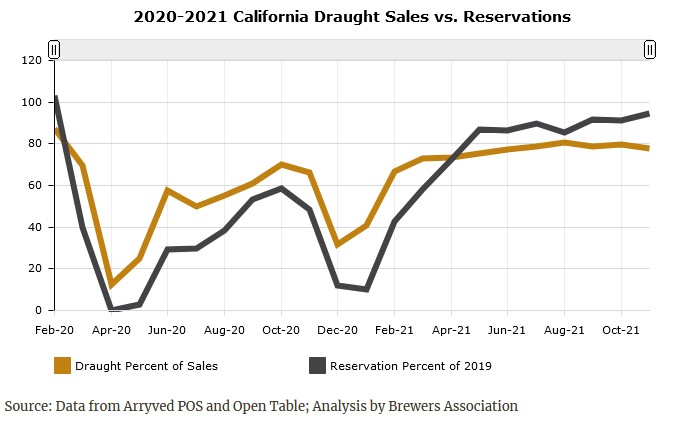 As such, this will be another valuable tool in working with state guilds and governments to illustrate the impact of both the pandemic and any changes in state policy on small brewers. As with the national data, the absolute numbers illustrated below for the same four states paint a slightly different picture (and show state seasonality), but fall largely in line with what we saw nationally. 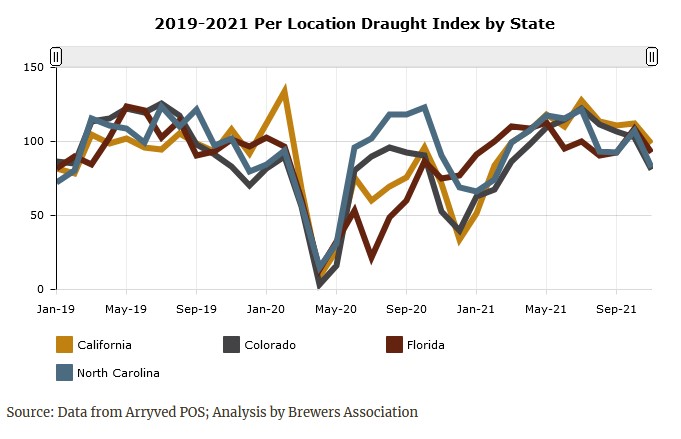 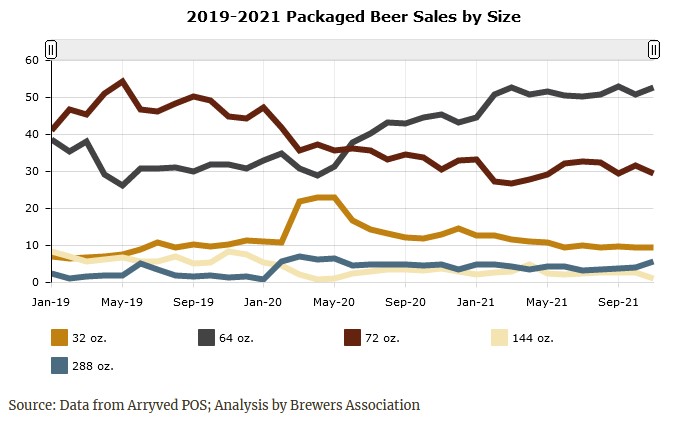 Two things I find interesting from this data. The first is that other than a brief period of elevated Crowler sales, there were not huge effects on what type of packages beer lovers were buying during the pandemic. While packaged sales roughly tripled overnight for a few months, if you didn’t know that when viewing this graph, you might be hard pressed to see that spike in the data.

Second is the slow and steady increase in 64-ounce sales (four-packs of 16-ounce cans) throughout the past year and a half. Most of that volume appears to be coming out of six-packs of 12-ounce cans. I’m past due for my annual packaging post, but that shift is much larger than anything we’re seeing in scan data. My theories (to be explored at a further point if people ask) are a different composition of breweries over time (more breweries entering canning starting predominately in 16-ounce cans) versus shifts within the breweries that were already selling packaged beer. I tend to guess the former, but it would be interesting to try and pull that apart.

Hopefully this look into POS data has been helpful as you think about your taproom or brewpub sales and where they might go in draught versus packaged formats moving forward. I welcome feedback about what else you might be interested in using this dataset to look at. I don’t have pricing information, but some other thoughts are:

Let me know what else you are seeing and thinking about in your taproom or brewpub, and what further analysis with this data set might be helpful.